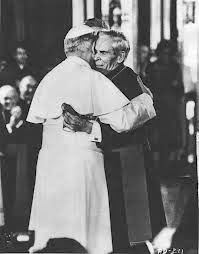 Today marks the unofficial feast day celebrating Venerable Fulton J. Sheen's birth into heaven.  While not yet named a Blessed or Saint, God willing, Sheen will be declared as such by the Church very soon, at which time his feast day would become official.  At the very least, we can honor him now as a man who loved Christ and His Church and desired for all souls to have that same love.  So while unofficial, I will still be celebrating today!

Bonnie at A Knotted Life has been posting a novena leading up to Sheen's Feast Day, and hosting several guests who share a love for Sheen.  Bonnie and Sheen are pretty tight, considering she and her family believe that it was through his intercession that God miraculously healed their stillborn (pulseless for 61 minutes) son.  You can read all about that here (trust me, you have to hear this story!).

Bonnie and I are good friends in real life, and while I knew about Sheen and had read a book or two of his before, my desire to "meet" him was kindled in the witness of what God worked in their infant son.  In the past few years, I have read many of his books, watched his You Tube videos, listed to Mp3s and CDs of his talks, and I have gotten to the point where I feel like we are friends.  That friendship between the people of God's Church here on earth and in heaven is something that I am so grateful to have an understanding of.   And last year, it became something that I wanted to share with my 5th grade students.  I created a curriculum to teach them about his life and about the things that he taught.  Today, this year's class of kids is going to begin their Fulton Sheen Notebooks and get an introduction on the upcoming journey that we will share with Archbishop Sheen.

Bonnie asked me to come over and be a guest (her first) on her very fun new blog video series, which she is calling the "Knot Bad" Videos.  I love it.  Kuddos to Bonnie for making this video so professional looking, because between a lost and found camera, lots of dead batteries, an ipod, two laptops, five kids, five non-overlapping nap times, and about five hours (not really), I was pretty sure she was going to call me later to say we had to do it ALL again.  She did an awesome job, and I appreciate her asking me to share some ideas for celebrating Sheen's Feast Day as a family or classroom.

So give the video a watch, visit Bonnie, and maybe try some of the crafts that I mention in the video: A Sheen Lapbook, the Pop-up Marian Shrine, the Monstrance Craft, and lots and lots more.