I love notebooking as a classroom tool, and I think that it can be fabulous in Religious Education Programs also.  Click here for a brief example that I made for another topic.

This Fulton Sheen Project demanded an awesome record keeping device as well as a keepsake for the kids, so a notebook is where we got started. 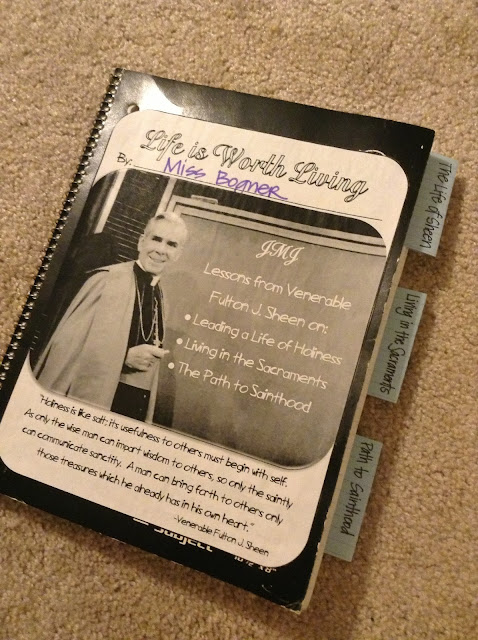 We added tabs, because we be working on three main topics within this study, including research on the life of Fulton Sheen, Living the Sacraments, and the Path to Sainthood.

I didn't take a picture of this, but the tabs are simply half of a 3x5 index card folded in half and then stapled onto a sheet of paper in the notebook where I wanted the section to start. 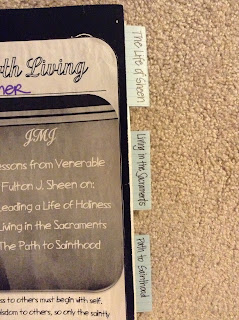 You can see the first one a little better on this title page.

We made this title page on the day I told them about the project.  The "quick facts about FJS" is just a 4x6 index card taped only on the top like a hinge.  It flips up and reveals about five quick facts about Sheen's life that introduced the kids to him and why we were going to study him.
Then they received a holy card with him on it (a huge hit), which is taped with a hinge on the left so that it can be flipped to read the prayer on back.  We ended this intro activity talking about intercessory prayer and added a space for prayer intentions under half of a 3x5 index card for privacy. 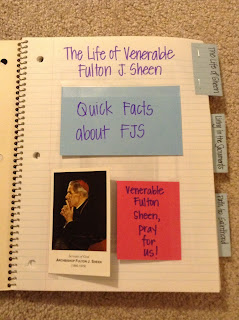 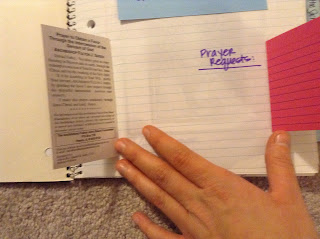 (A note- I always prefer tape and especially staples when notebooking, because they allow for correction of mistakes, unlike glue.  Gluesticks are not as permanent and can fall out as a notebook is used and also don't go very far compared to their price.  Liquid glue is very permanent, but creates big problems for kids who can't use "just a little."  Notebook pages stuck together containing prized work is not a crisis I enjoy fixing.  That being said, I use staples, tape, glue sticks, and liquid glue for different things in a notebook, I just have my preferences.)

Here is  what the Notebook cover looks like, and you can access three different versions as printables below.  Stay tuned for more activities! 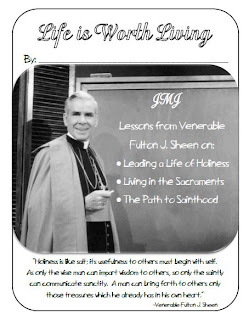