The natural summary of a person's life?
A timeline, of course.

So after watching the film about Fulton Sheen's life, I challenged my students to take a stack of post-it notes (one of my favorite educational resources, btw) and create a timeline of FJS's life.  Important items only.  Had to be events, not just facts.  And had to be placed in chronological order (with a little help from me supplying dates they did not know off the top of their heads.) 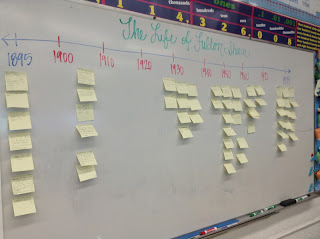 I was pretty impressed, considering that I only gave them five minutes.  And I know that you can't read them, but they were very accurate and specific with their events.

As a reward, I told them that I had something to add to our Sheen corner, which has been gradually growing in one spot of our classroom.  So far it has newspaper articles, photos, prayers, student artwork about Sheen, and even a copy of a letter that one kid wrote (her own idea!) to Sheen's niece who lives in New York.  The big pockets have more items to read or view, ranging from articles to a couple of his books to the documentary that we watched as a group. 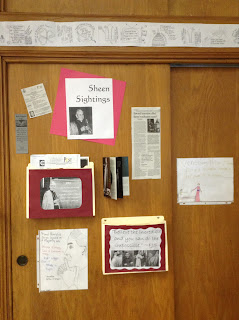 I pulled out the timeline that I created and drew illustrations for and hung it at the top. (it is that lame looking white strip above everything.)

And they oohed and aahed, and then I showed them the one in my awesome notebook: 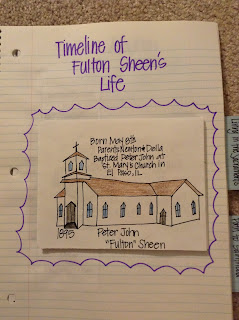 And they flipped out a bit. 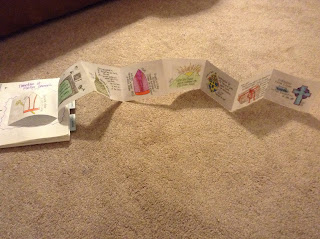 Because then they got their own. 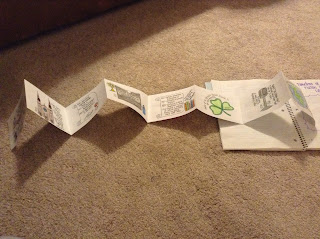 It is impossible to get a close up picture of the whole thing, but the timeline has 16 events in the life of Sheen from his birth to him being declared Venerable last summer. 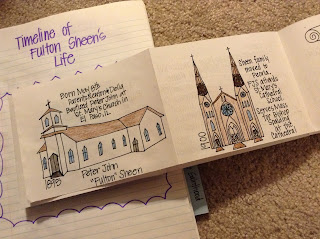 When printed back to front from the file available below and then cut into strips horizontally, it can be taped into a two sided strip that is in order.  (Chronological order being the challenge for the kids).  We then accordion folded it so that it would neatly fit into our notebooks, but could still be pulled out and seen from both sides. 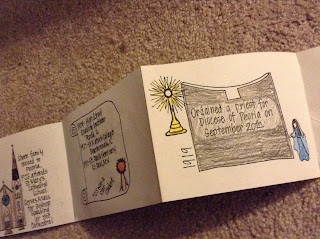 You also could copy it back to front and cut it into 8 individual panels and then staple it together like a mini book, or print single sided to make a timeline for a wall like I had above. 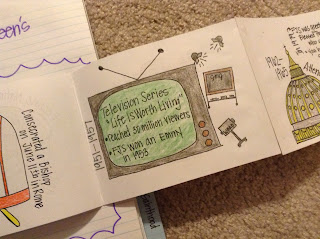 However you use it, here is the link for the printable: 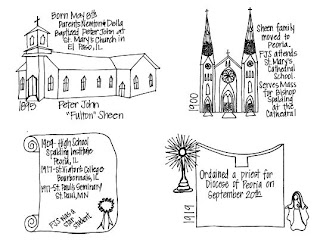